What is an Emergency Screening? 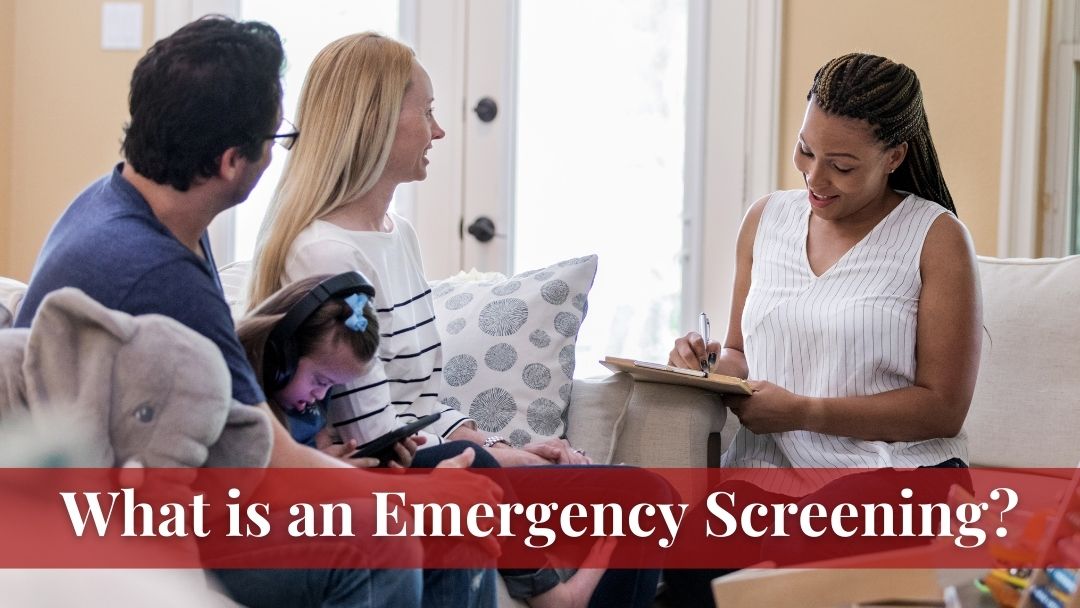 While California has a cohesive legal framework in place for addressing all family law issues through our Family Code, each county has the ability to vary their own implementation of those rules.
Santa Clara County has taken the opportunity to create one such unique process for allegations of child endangerment, child abuse, or other behavior posing a danger to a child. In Santa Clara County, if a Family Law Judge receives evidence that an immediate emergency exists that threatens the well-being and safety of a child, the Judge can order the parents to complete an emergency screening. This article is intended to provide an overview of what parents can expect if they are referred to an emergency screening.

What is an emergency screening in Santa Clara County?

The California Family Code provides the court with the option of ordering parties to participate in custody evaluations. A custody evaluation is “an expert investigation and analysis of the health, safety, welfare, and best interest of children with regard to disputed custody and visitation issues.” Cal. Rules of Court Rule 5.220.

This process utilizes a neutral mental health expert who conducts an investigation into the family and the children to provide additional information to the court. These investigative evaluations are important because they can provide much more information to the court than two parents who disagree and throw words back and forth at each other. Oftentimes, the judge is struggling to identify who is the more credible parent and there is often a lack of corroborative evidence to support either parents’ allegations or statements.

Furthermore, parents often recount statements of a minor child to the judge which the judge must carefully consider and scrutinize.
With a custody evaluation, an expert does an investigation into the allegations or scenario of a family, then provides a neutral report and recommendations to the judge for what is in the best interests of the child.

An emergency screening is unique from a custody evaluation because this is a narrowly tailored evaluation. The screener is looking at the immediate safety concerns related to the child as opposed to a broad-ranging, in-depth analysis of the overall long-term needs of the child.

• What are the safety concerns of the child right now, at this moment?
• What is needed to keep the child safe?
• And how can we meet their needs and support their best interests while the parties work to get other supportive services in place—or perhaps until the parents reach a place where they can begin building their co-parent relationship?

When is an emergency screening appropriate?

An emergency screening can be requested any time there is evidence to support or reason to believe that a child’s health, well-being and safety is at risk. An emergency screening can investigate, stop, and hopefully prevent any future harm from happening to the child. It is usually requested when:
There is evidence of the child being abused or neglected
There is evidence of drug use
Or when a parent is preventing the other parent from accessing the child and there is concern that the withholding parent is creating a higher risk of danger.

How does an emergency screening happen?

An emergency screening through FCS is a day-long process. Parents are required to be at the courthouse for the entire day, beginning at 8:00am. Any children involved also must be within close proximity to the courthouse as they too will be called in sometime during the day for an interview and observation. It is necessary for both parents to request time off from their respective employers so that they can be present at court for the entire day. The custodial parent will also need to coordinate someone to watch over the children while the parent is in the courthouse and while any children are waiting to be called up by the emergency screener.

At the end of the day, the screener will meet either with the attorneys or the parties, and relay their findings. After this discussion, the screener will provide a written report with recommended orders. The parties will have the opportunity to review this document and decide whether they are in agreement or if they wish to object. If both parents agree, then it is sent to the judge for signature and becomes an order of the court that day. Should either parent choose to object, the parties will immediately appear before the judge for a mini-trial where the witness is the screener and attorneys/parties can ask the screener questions about the report and their findings.

Pros of FCS screenings:
They are conducted all in one day.
They occur at court and so at the end of the day there is quicker finality as there is an immediate ability to appear before the judge in the event of a disagreement with the recommendation.

Cons of FCS screenings:
FCS is often very backlogged in their schedule. It can take weeks to get an appointment with FCS.
The screener is working with a very tight timeframe: it is possible that none of your witnesses will be contacted.
Your children are interviewed in an unfamiliar environment and the observation takes place in an unfamiliar environment. It is possible your child will behave unusually based solely upon the unusual nature of the proceedings.
Parents may need to miss work & children will miss a day of school.
Children are taken to the courthouse and have more exposure to the litigation by being at the courthouse.
You have no option as to which screener is assigned to you.

The biggest difference is that these screenings occur outside of court operations: they are private. The first step is for the parents to work together to select a screener. The screener is not limited to conducting the investigation within one day. The screener has the option to meet with the children in an environment the children are familiar and comfortable with. The screener has more time to decide if they want to contact witnesses. In all other ways, the goals of the two screenings are the same: identify and address safety concerns & create a plan to address the immediate safety needs of the child(ren).

Pros of a private screening:
Fewer time constraints (which may also be a negative depending upon the allegations)
Parents have a say in the selection of the screener
The child is not exposed to the courthouse
The child is not removed from school for an entire day

How should I prepare for an emergency screening?

• and a brief that outlines the pressing issues and arguments supporting the parent’s position as well as statements addressing the other parent’s allegations and arguments reflected in his/her own brief.

To prepare for a screening, it is first important to very clearly identify for yourself what your concerns are. It is very common in Family Law Matters for parties to be overwhelmed by the emotional components of what is occuring. This is completely understandable – it is also important to know that this can take away from your ability to communicate your concerns. Making sure you have time to journal and talk to your own therapist or legal counsel can be critical to helping you clarify your concerns and prepare your evidence so that you may present it in the most effective way to the screener.

It is of critical importance that parents do not share information about the screening with their children. Screeners will be on the lookout for red flags such as:
• A child sits down and immediately says “I hate X parent. I don’t want to see them again.”
• Using words that are not age appropriate.
• Language or behavior from a child that suggests they are repeating what other adults say around them

Part of the screener’s role is to be vigilant for coaching. There may be false allegations of abuse, or the abuse may be much more extreme than the other parent is aware of. There may be threats of harm made against the child. The child may also be in a situation where a parent has threatened that if the child doesn’t say certain things the child will be removed and placed in foster care.
One reason it is important to be honest with your attorney and any mental health support system you have is that parents often say things they think are appropriate but which are not.
For example: Telling a child, “if you ever hate being with (the other parent) call me immediately and I will come get you.”
Statements like that seem benign, but are laying the foundation for the child to see the parents as opposing entities; if the child wants to make the parent who made the statement happy, then nothing positive can be expressed about the other parent or that relationship.

How does an emergency screening end?

These recommendations can include:

If there are any objections to the recommendations, a hearing in front of a judge will be conducted. If the screening is with FCS, the hearing will likely be that same day. If it is a private screening, the judge will have already set a return court date for the hearing.

Once the hearing is complete, the judge will make a decision based upon the recommendations and answers to the voir dire questions raised by both parties. Typically, once orders are made, the Court will set a review hearing to come back at a later date to check on how things are going and whether the Judge needs to issue other orders.

If you have questions about the safety and well-being of your child(ren) while in the care of the other parent – or if you are receiving allegations of being an unsafe parent – and you have questions about emergency screenings and if they might be a benefit to your family law case, we welcome a call from you to discuss your options and the safety and well-being of your child(ren).